The acclaimed bass spawning season is either happening or about to happen throughout most of the US. See the map below for a general estimation as to when the fish are spawning in your neck of the woods.

It’s finally here, another fishing season is about to begin! Many, many anglers claim spring is the best season to catch bass. With the sun high, warm rays of spring sunshine force the big females out of their winter haunts and into warm shallow bays, where even novice anglers stand a fair chance at landing a real trophy. Novice and expert fishermen alike probably took the winter off, so here is a refresher on some basic bass spawning biology.

Once temperatures get to around 55+, the males leave the security of deep water and look for a nesting ground in the shallows. The males will peruse the shallows, looking for some unique characteristics in shallow, warm bays. These male basses must choose their nest location wisely, they will be on around the clock hour guard duty with the eggs during their incubation period. Bass often choose nests adjacent to structure that aids in guarding the eggs from panfish, salamanders, turtles, snakes, and other predators.

While all the males are tidying up their chosen nests, the females lay and wait a few dozen yards away, likely in deep, yet conveniently close water. Once the temperatures hit a certain level the females placidly swim up and check out what nests the males have to offer. They will hang around their chosen nest for a few days and then lay eggs. Females usually lay eggs at a few different nests. After females spawn they typically retreat to deeper water, remaining fairly inactive as they recover for a few weeks. Some females, particularly in the south, will help guard the nest along with the male.

In most cases, male bass is the guardians. These two to four-pound wimps are in charge of guarding the helpless eggs and fry for the next couple of days. The male’s guard duty is essential for the survival of the species. This is why many anglers are disgruntled and find fishing during the bass spawn unethical. For a few minutes of fun, the angler puts the whole nest–and thus the future of fishing– in jeopardy of predation.

Largemouth bass search for the warmest water in the lake to spawn. They usually spawn in three to five feet of water in a calm, secluded bay with lots of weeds and other structure. They like a hard bottom for the eggs to stick to as well. It is never very hard to find prime bedding areas, but finding beds at the right time is the issue.

Where will the fish be and when you ask? As discussed in a previous article, water temperature is huge. I’ll say that again, water temperature is huge. The water temperatures will lead you to the fish. As a general guideline, 50-55 the fish will be on small adjacent points near spawning flats. From 55-60, the fish will creep much closer to the spawning flats. Usually, in this temperature range, the males will be found on the beds or perusing around looking for a good place to chauffer a female. Below is a chart that attempts to explain this process. In spring, the weather often fluctuates, so think of the fish movements as an ebb and flow (shown below). The fish move back and forth as the water warms and cools between cold fronts.

Once the temperatures hit north of 60-65, males and females are either on the beds or the fish have finished spawning. Different pairs of bass will spawn at different time periods, some will spawn early, some will spawn late. Trophy bass is known to spawn earlier than later. 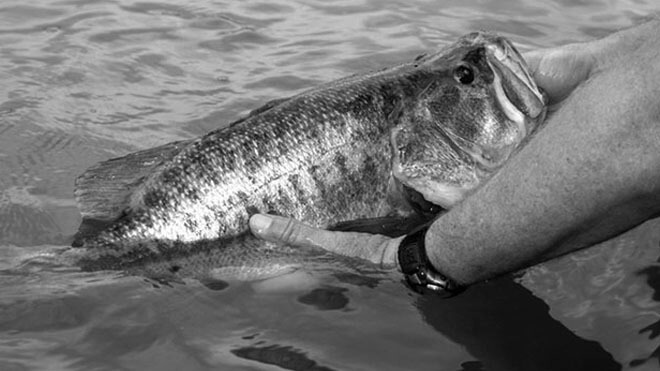 I’ll let you in on a secret: there isn’t much of a secret to catching prespawn or spawning bass. Finding the fish is 90% of the battle, catching is the easy part. However, a big issue with spawn fishing is that most fishermen know the routine. I’ve been in tournaments where dozens of bass boats clog a narrow channel all going for the same fish.

What makes spring fishing so fun also makes fishing pressure very high. When you have a big group of anglers who all know where the spawning flats are, you often will get skittish fish who have either been caught already or seen too much disturbance to be in a biting mood.

Lure choice in prespawn conditions can greatly depend on fishing pressure. If you are fishing some large reservoir way out of town that receives little pressure, fast topwaters and other irritating baits work great. However if the lake is in town, with a large population of fishermen commonly on the lake, a better lure choice is a subtle plastic or a dropshot rig. As a rule, when fish are pressured, going smaller and lighter is the winning ticket.

Jigs work well if you have a good view of the nest and low boat movement. Cast the jig past the nest and reel it in until the jig is laying smack dab in the middle of the nest. Bass will often take the jig as a threat and strike it. Other times the fish will lightly grip the bait and move it off the nest. Pay careful attention to how the fish reacts to the lure and you should be able to tell what its intentions are. I’ve missed many hookups thinking the bass chomped my jig when really it was a graceful nibble.

When in doubt consider a salamander lure. Salamanders are natural bass egg predators and bass often eats them simply to eliminate a threat, regardless of hunger. If bass is not reacting to anything you’ve tossed, a salamander can sometimes get a strike of hateful fury. If the fish isn’t biting anything, leave it alone for a while, it may be aware of your presence.

A final note that deserves its own paragraph: bring polarized sunglasses! Spring bass fishing is heavy on the sight fishing. Your best friend is a good set of shades, letting you see a couple of feet deeper in the water or spot those big 12″ to 24″ carved out nests on the bottom.