Each Catfish angler often has their own forte especially baits. Go-to baits are either coveted or taken for granted based upon their availability at any given time. There’s no denying, however, the importance of having the right bait for every situation and catfish species. Here we examine the characteristics, distribution, and fishing value of the most significant baitfish species favored by the catfish crowd. 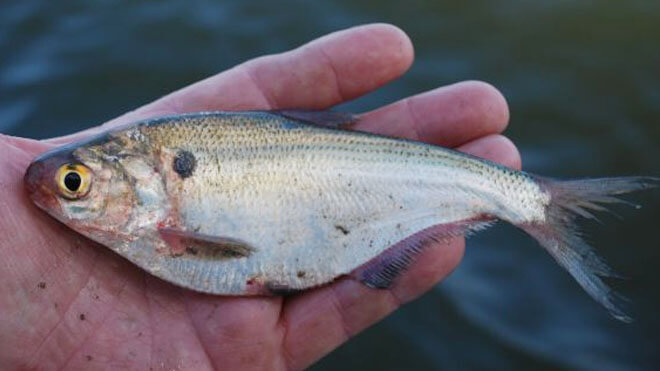 No baitfish species is more widely distributed and utilized by catfish anglers than gizzard shad. Coloration is predominantly silver with grayish blue hues across their back and a dark purple spot above the gill cover. During the spawning season, gizzard shad often take on a darker coloration consisting of a black or dark gray back and fins. Distinctive features include a rounded upper jaw and a blunt nose. Another way to distinguish them from other shad species, gizzard shad have 29 to 35 rays on their anal fin and 10 to 13 rays on their dorsal fin—the last of which is a long extended ray.

Gizzard shad are distributed throughout the eastern seaboard, extending north into Massachusetts, across much of the central Midwest, and throughout the South as far west as Arizona. Being more tolerant of cold water than other shad species, they are present throughout the Great Lakes and select waterways of Minnesota and North Dakota.

Gizzard shad are among the largest shad species in North America. Adults can reach 8 to 14 inches in length and live 6 to 10 years. They are schooling fish that roam in open water, feeding primarily on plankton when they are young and also consuming algae and insect larvae later in life.

Due to their wide distribution and abundance, gizzard shad are a catfish bait staple across the nation. For blue cat anglers, gizzard shad are the ticket to catching fish of all sizes 12 months a year. Rigging options and preferred bait sizes vary among anglers, and fresh shad is typically used for blues, rather than frozen or soured although frozen bait can work well when fresh shad are unavailable.

For big channel cats, gizzard shad in the 3- to 5-inch range can be fished whole while smaller pieces of cutbait work well for small and large channels alike. Sliced and diced, freshly cut shad rarely gets ignored. And if ice-out channels are your quarry, a strip of soured shad matches their natural food source at that time of year. Even the guts of shad are prime bait. Wrapped neatly on the hook, guts are tempting for finicky catfish. Gizzard shad aren’t the first option, but they have produced flatheads in a pinch. 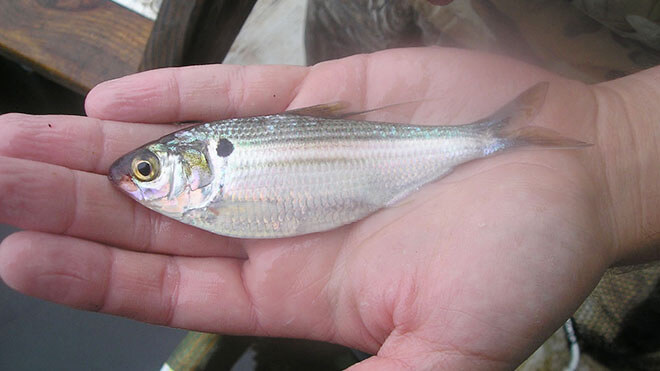 Due to their inability to survive water temperatures below 40°F and low dissolved oxygen, threadfin shad are prone to winter and summer die-offs and are most common in the Midsouth. Their range stretches from the Appalachians north to Illinois, west to California, and south to the Gulf of Mexico.

Threadfin shad can grow to 6 to 7 inches in length and live 3 to 4 years. However, most measure less than 3 inches. They’re pelagic and feed mostly on zooplankton. Due to their relatively small size at maturity and prolific spawning habits, they’re stocked in waters across the country as prey for sportfishing.

Due to their small size and fragile nature, threadfins are best used fresh after being caught with a cast net. Keep them alive in an aerated bait tank or immediately place them in plastic bags and pack them on ice for maximum freshness. One to several threadfins can then be baited on a hook for blue or channel cats. The entrails are also effective.

Considered the filet mignon of catfish baits, these long, slender, river herring get the attention of all catfish species, along with stripers, trophy-size bass, trout, and most everything else that can fit them into their mouths. Skipjack is silver in color, with a slight iridescent purple hue on the top of some specimens. They have a deeply forked tail, a protruding lower jaw, and a wide-opening mouth.

Skipjacks are found throughout the Gulf of Mexico drainage basin. They favor moving water and tolerate brackish water in coastal fisheries.

This species is fast-growing and can reach 14 to 20 inches in just 4 years. In fast-water settings, skipjack feeds on schooling minnows trapped in current seams. Casting small spinners, spoons, and double crappie jigs are prime methods for catching this migratory baitfish.

Skipjack in the 4- to 6-inch range can be fished on single-hook rigs for blues, while larger specimens in the 7- to 12-inch range can be used for trophy blues on double-hook rigs. Skipjack longer than about 12 inches make great cutbait for blues, channels, and even flatheads. Personal preferences exist between using the head or tail section, but in either case, cats love the taste of skipjack. As long as it’s kept fresh and bait’s changed periodically, skipjack is hard to beat. 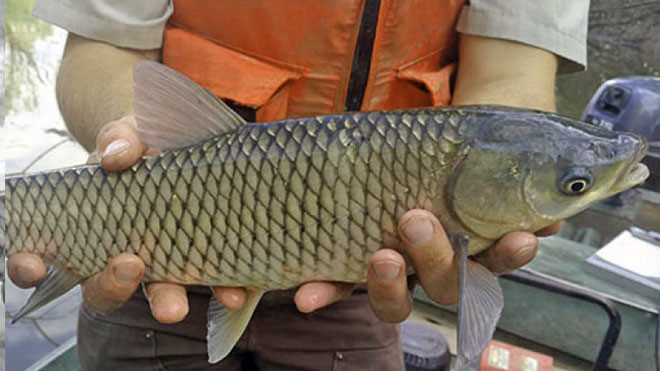 There are several varieties of carp wearing the label “Asian carp.” The two most prevalent are the bighead and silver carp. Both species have broad bodies, with their eyes positioned forward and on the lower portion of their scaleless heads. They are dark gray in color, fading to dingy white toward their underside. Scales are small compared to other carp species in North America.

Bighead carp have distinctive irregular dark blotches on their sides, which are not present on silver carp. Both have large downward slanted mouths that open widely for filtering plankton.

Originally brought to the United States by the Arkansas aquaculture industry, these nonindigenous fish escaped fish farms during flooding in the 1980s and have rapidly spread throughout much of the Mississippi River basin.

Native to China and eastern Russia, bighead and silver carp are found throughout much of the Mississippi, Missouri, and Illinois river systems, with an impending threat to Lake Michigan.

Bighead and silver carp are fast-growing filter feeders. Bigheads tend to filter larger particles than silvers and in general consume a greater proportion of zooplankton in their diets while silvers consume more phytoplankton. They can become sexually mature in less than five years and can produce from 250,000 to over 1 million eggs per spawning cycle. As a filter feeder, they’re less prone to be caught by hook and line but are commonly taken in nets or by bow and arrow.

Bighead carp can reach 60 inches and commonly weigh 30 to 60 pounds, with top-end size nearing 150 pounds. Silver carp are smaller, with an average size of 25 to 35 inches and weights of 25 to 40 pounds, but can grow in excess of 100 pounds. Silver carp often appear in large schools and have the distinctive behavior of leaping from the water when startled by boat engines.

Where permitted by law, juvenile Asian carp of fewer than 2 pounds provide an effective livebait option for trophy flatheads. Larger Asian carp are best served as cutbait for channel catfish with larger sections used for blue cats. Some of the largest blue catfish caught from the Mississippi and Missouri River systems in recent years have come on large chunks of Asian carp fished on double-hook rigs. 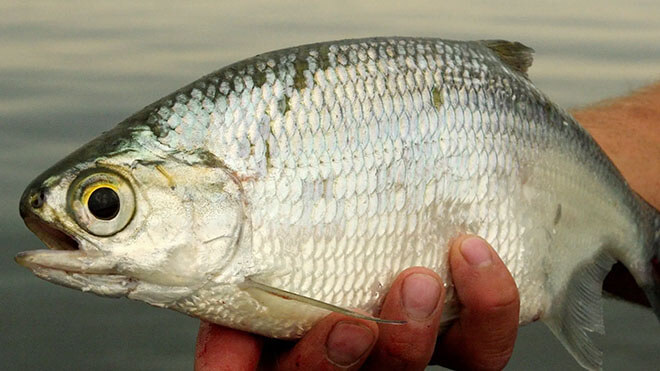 Mooneye and goldeye are related species and closely resemble each other. The smooth ventral keel of both species separates them from shad and herring, which have a serrated ventral keel. In addition, they’re easily distinguished from shad by the teeth on their tongues. They have large eyes set close to their rounded noses. They are bright silver in color, with broad forked tails and a metallic shine to their eyes as referenced in their names. The goldeye has a telltale golden iris and is generally more slender than the mooneye. The dorsal fin of the goldeye starts after the beginning of its anal fin.

Mooneye and goldeye reside in lakes and rivers from the Gulf of Mexico through central Canada in a sporadic, non-continuous manner. Major concentrations of goldeye exist in both the Saskatchewan and Winnipeg river systems, with mooneye being native to the Ohio River system.

Unlike plankton-feeding shad, mooneye and goldeye are keen to feed on minnows and terrestrial insects. For this reason, they can be caught on hook and line or with a cast net upon revealing their location as they chase bait to the surface. They are fast growing—able to top 8 inches in their first growing season and reaching a top end size in excess of 18 inches and weight of more than 2 pounds.

Goldeyes are cherished as bait throughout their range, including as cutbait on the Red River in Manitoba for trophy channel catfish. Further south on the Ohio River, catfish anglers prefer mooneye for their hardiness and ability to attract both blues and flatheads with the commotion caused when two live mooneyes are fished on a tandem rig. These baits work equally well for flatheads, blues, and channel catfish. 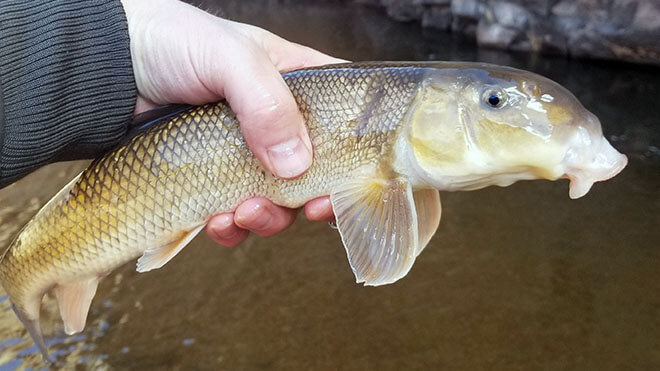 White suckers are soft-rayed baitfish available to catfish anglers throughout the northern half of North America. This species has an elongated cylindrical body with a rounded tail and small dorsal fin. Coloration differs among individual fish and varies from dark brown, copper, gray, green, or black across the back and progressively getting lighter in coloration on their sides and underbelly. The most distinctive feature is their down-turned mouth made of soft tissue for vacuum-feeding on the bottom.

White suckers are established across North America, from northern Maine south to the Carolinas and west to New Mexico and north throughout Canada. They’re resilient and can survive in a wide range of water quality and temperatures.

White suckers are opportunistic bottom feeders with a diet consisting of insect larvae, crustaceans, algae, worms, and minnows. They are long-lived, with a life expectancy of 12 to 15 years and an adult size that can exceed 18 inches. They can be caught by hook and line with worms as bait or seined or netted from rivers.

In addition to being netted in the wild, white suckers are raised in commercial ponds for bait. They’re great flathead bait as they are relatively hardy and readily available from bait shops in sizes from 4 to 20 inches. Wild-caught suckers have a better fleeing instinct on the hook to draw more attention from predatory flatheads so they are preferred by anglers over pond-raised ones. Larger white suckers can be fished whole for flatheads, while larger specimens can be chunked or filleted as cut bait for channels and blues.